Home
Market
Stocks lose steam in wake of Fed statement
Prev Article Next Article
This post was originally published on this sitehttps://i-invdn-com.akamaized.net/trkd-images/LYNXMPEG0S13O_L.jpg 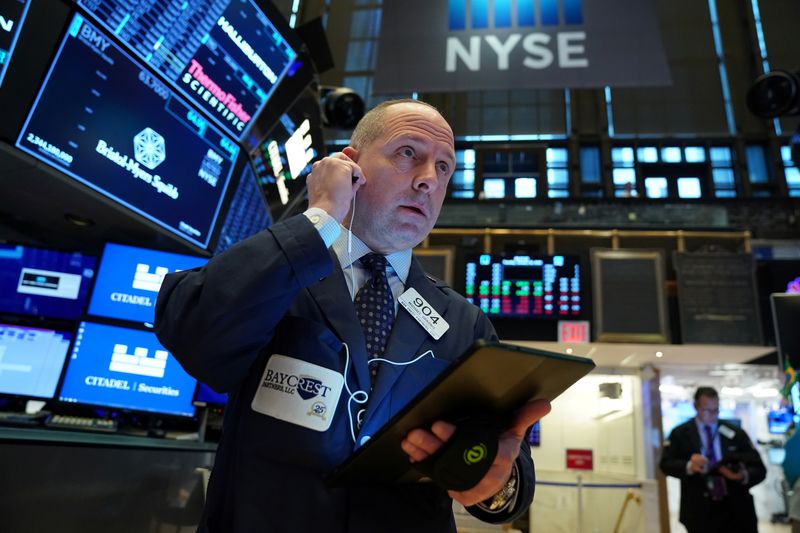 © Reuters. A trader works at the New York Stock Exchange

NEW YORK (Reuters) – The S&P 500 ended slightly lower on Wednesday, as an initial boost from the likes of Apple, Boeing and General Electric following their quarterly results faded in the wake of a policy announcement from the Federal Reserve.

Stocks initially showed little reaction to the Fed’s policy statement but steadily lost ground on the heels of a news conference by chairman Jerome Powell. The Fed held rates steady as expected while offering no new guidance on its balance sheet, but Powell noted “uncertainties about the outlook remain” and noted the coronavirus outbreak in China.

Since the Fed’s last rate cut in October, its third reduction of 2019, policymakers have agreed to keep their target policy rate in the current range of 1.50% and 1.75%.

Apple Inc (O:) gained 2.09% after the iPhone maker late on Tuesday reported earnings for the holiday shopping quarter that topped analysts’ expectations, even as it braced for more disruptions in virus-hit China.

Boeing Co (N:) rose 1.72% after the planemaker forecast nearly $19 billion in costs related to the grounding of its 737 MAX jets, smaller than what many analysts had expected, and helping offset the company’s report of its first annual loss since 1997.

Several companies have warned of disruption to their operations due to the coronavirus outbreak, and a Chinese government economist was quoted as saying the country’s economic growth may drop to 5% or even lower.

“I don’t mean to minimize the human impact of the virus but what is more concerning to me is not that the market has not responded to the virus but rather that it was up so strongly in the first 2-1/2 weeks of January after a very, very strong 2019,” said Ellen Hazen, portfolio manager at F.L.Putnam Investment Management in Wellesley, Massachusetts.

“The market does seem to have gotten ahead of itself.”

As earnings gather pace, analysts expect profit for S&P 500 companies to be flat in the fourth quarter, an improvement over the 0.6% decline estimated at the start of the season, according to Refinitiv data.

Starbucks Corp (O:) dropped 2.12% after warning of a financial hit as it closed thousands of restaurants and adjusted operating hours in China.

Advancing issues outnumbered declining ones on the NYSE by a 1.01-to-1 ratio; on Nasdaq, a 1.62-to-1 ratio favored decliners.

About 6.88 billion shares changed hands in U.S. exchanges, compared with the 7.45 billion daily average over the last 20 sessions.