Home
Stocks
MarketWatch First Take: HP investors should be girding for a proxy battle with Xerox, Carl Icahn
Prev Article Next Article
This post was originally published on this site 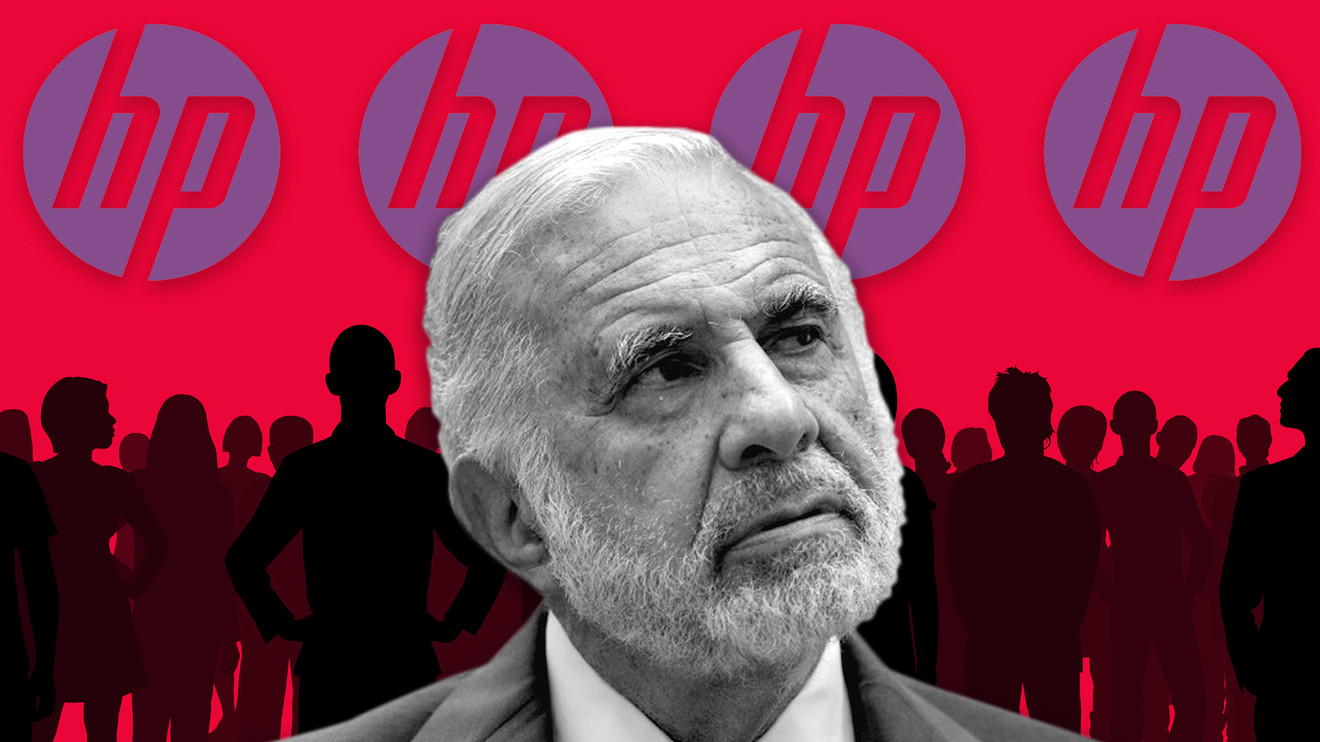 The absurd $33 billion bid by Xerox Holdings Corp. for the much larger HP Inc. should not be happening, but it looks like the storied tech giant could be heading for another unwanted proxy fight.

In a move likely egged on by its largest shareholder, activist investor Carl Icahn, Xerox’s crazy bid was further legitimized by news last week that the copier company had lined up the financing for its $22-a-share offer in cash and stock. HP HPQ, +0.37%  has continued to fight off the advances of Xerox XRX, +1.06% XRX, +1.06% XRX, +1.06% XRX, +1.06% , with its latest “No, thank you” saying that Xerox is still undervaluing the printing and PC giant that is more than three times as large as itself. HP said Xerox’s offer “significantly undervalues HP — and is not a basis for discussion.”

It seems unfathomable after all the drama that HP has gone through in the past two decades that there is yet another antagonist causing turmoil. But some M&A experts and analysts believe that some kind of deal between the two is more likely than not, even if tying up with an old copier pioneer is the last thing HP would seem to need.

Icahn now owns almost 11% of Xerox stock, and his firm, Icahn Capital, has three seats on its board. Several years ago, Icahn picked a battle with Xerox which ultimately led to its splitting itself into two businesses in 2016 — copying and printing in one, and computer services in the other, a split that had some similarities to the mammoth Hewlett-Packard Co. separation in 2015, but at a fraction of HP’s scale.

In a rare acknowledgment, however, the companies have admitted discussing a potential deal. In a Nov. 24 letter, HP acknowledged meetings with Xerox last August and September, but reminded Xerox that it walked away from those meetings without answering HP’s questions about its business.

“You failed to address them and instead walked away, choosing to pursue a hostile approach rather than continue down a more productive path,” HP CEO Enrique Lores and Chairman Chip Bergh wrote.

Officials at both HP and Xerox declined to comment beyond their public filings and letters.

“Both of these companies have been subject to activist campaigns. Both companies have lost some luster. There is a fairly strong rationale for the combination,” said Devon Ritch, managing director of mergers and acquisitions at Union Square Advisors in New York. “To publicly acknowledge that there have been talks in the past is very unusual as well…It’s more about who buys who and who is in charge at the closing.”

At HP’s next annual meeting, shareholders may be given the chance to decide on whether the deal proposed by Xerox is just another case of “two garbage trucks colliding,” as Sun Microsystems co-founder Scott McNealy once quipped in 2001 about Hewlett Packard Co.’s acquisition of Compaq, or whether it is a necessary move for two companies with big printing businesses to survive in a declining market. Either Xerox or Icahn is expected to put forth a proposed slate of directors for HP’s board for a shareholder vote, possibly in April.

“It feels like they are ramping up to put an alternative board together to support the Xerox bid,” Ritch said, adding that Xerox’s presentation to investors, filed with regulators in early December, laid out a strong rationale for a combination, even with its debt burden, which he noted is on par with others in the hardware industry. The presentation also noted that the path to closing included three weeks of mutual due diligence requested to verify assumptions, presumably to address HP’s initial concerns voiced in November about Xerox’s business and lack of due-diligence discussions.

“It’s a high probability he [Icahn] nominates his slate for board of directors,” said Evercore ISI Securities analyst Amit Daryanani, in an email. The deadline to nominate an alternative slate of directors is Jan. 24, before HP’s next annual meeting, which usually takes place in April.

Icahn also holds about 4.3% of HP shares, but whether he and Xerox will be able to convince other HP investors of why they should vote for an alternative slate of directors — and lead HP to be bought by Xerox — is a big if. On the surface, the idea that two companies facing a printing industry that’s declining can successfully combine — using an enormous pile of debt, cost-cutting and service debt estimated at $24 billion — sounds like a miracle in the making.

Another likely round of restructuring sounds a lot like what HP has largely been doing for the past decade, during which former Chief Executive Meg Whitman split the company in two amid a wave of spin-offs, restructurings and layoffs that must have left the remaining employee base exhausted and wary of any more change. Last year, HP announced another $1 billion restructuring plan, one that was scoffed at by Xerox in one of its recent letters, even as it plans a merger that will almost certainly lead to yet another giant restructuring and more goodbye parties in Palo Alto.

“It is possible that the modest, expensive and time-consuming cost savings included in the restructuring plan you announced on Oct. 3, 2019 (only $1 billion over three years at a cost of $1 billion in restructuring charges), has resulted in a lack of confidence in HP’s ability to realize the $2+ billion of synergies your team previously agreed could be achieved in a combination,” Xerox Chief Executive John Visentin wrote in his late November letter to HP, suggesting that the companies agreed in previous negotiations that plenty could — and would — be cut if they combined.

Indeed, Icahn argued in a letter to HP’s board early last month that the company’s many restructuring programs have not worked, and that it is headed toward its own demise.

“The road to the graveyard on Wall Street is littered with the bones of companies, such as Eastman Kodak, which wasted a great deal of valuable time by coming up with one ill-fated plan after another and also failed to act decisively when transformative opportunities presented themselves,” he wrote.

But through all of its financial machinations since the split, HP has mostly exceeded modest expectations — especially when compared with its sibling, Hewlett Packard Enterprise Co. HPE, +0.52%  — and it is certainly not in need of more declining printing assets. Xerox however, noted to investors that it had already delivered approximately $1 billion in savings from its own restructuring over the past 18 months, compared to HP’s ongoing plans. It also said in its presentation that the new pro forma company will be more profitable, be in a better position to offer customers a stronger mix of products and support, and that increased cash flow generated from the deal will enable rapid de-leveraging, and investment in shareholder returns and innovation.

Longtime HP investors may be tired of this type of fight. Shareholders of the original, larger Hewlett-Packard had to decide a company-changing proxy fight in 2002, with the sons of the co-founders Bill Hewlett and David Packard opposing the company’s bid to buy Compaq Computer. HP, then led by Carly Fiorina, won in a close vote. Since then, the mammoth HP embarked on restructuring after restructuring, until it finally split into two companies, so it could be more nimble.

But Wall Street looks to be betting something will happen. Martin Wolf, principal of Martinwolf, a merger and acquisition advisory firm for middle-market companies, pointed out that Xerox’s stock rose after it first announced its bid. With the guarantee of financing, “I think the odds for some sort of combination have increased dramatically,” he said. Since the news first broke in early November in the Wall Street Journal, HP’s shares have jumped about 9.25%

“It remains which team will be in control,” Wolf added, noting that HP investors would own 48% of the combined company at the current price but would gain control if Xerox raises its offer.

Wall Street is a betting culture, and with his track record, it may be foolish to bet against Icahn & Co. in a proxy fight. But if HP investors are confident in HP’s current management team, they should tell Xerox and Icahn to buzz off with their current pitch. The big question, though, may ultimately be who acquires who, and which company will be leading the way.