Home
Market
Surveillance in a leafy enclave, Ghosn's Tokyo life was under strict monitoring
Prev Article Next Article
This post was originally published on this sitehttps://i-invdn-com.akamaized.net/trkd-images/LYNXMPEG001A9_L.jpg 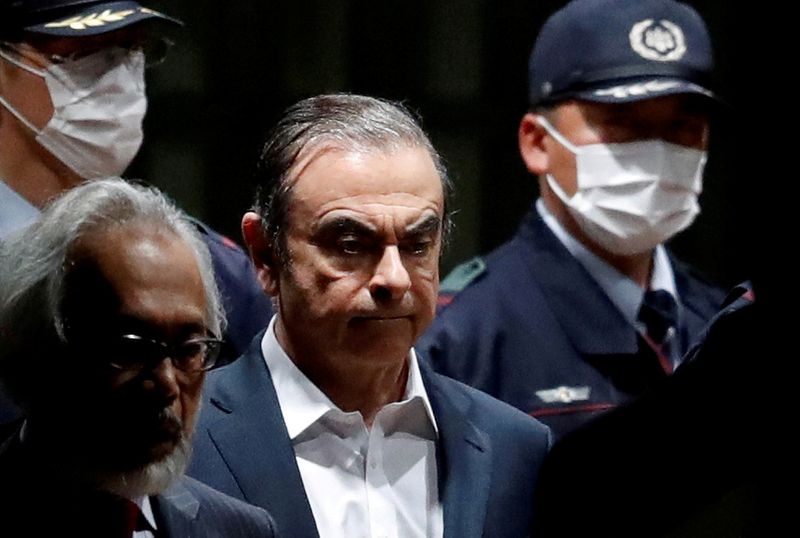 By Tim Kelly and Maki Shiraki

TOKYO (Reuters) – The imposing home where Carlos Ghosn lived for the last seven months and probably launched a daring escape to avoid Japanese prosecutors is nestled in a leafy enclave of Tokyo where most people pay little attention to Westerners or luxury cars.

Yet neighbors say it was impossible not to notice one of the world’s most famous executives, or the black car that seemed to idle nearby whenever he was around – a stark reminder of the surveillance on the ousted Nissan Motor Co chairman while out on bail for financial misconduct charges.

Ghosn on Tuesday said he had fled to Lebanon to escape a “rigged” justice system in Japan, an astonishing revelation that raises questions about how one of the world’s most-recognized businessmen slipped past authorities, especially after he had surrendered his passports under the terms of his bail.

Hana Takeda, who lives in an apartment close to the house where Ghosn has lived since May, said she would sometimes see him out walking with one of his three daughters.

“He wasn’t very secretive. I would see him hanging around with his daughter,” Takeda, 28, told Reuters.

The large, multi-level house is not far from the central Roppongi district in an area popular with diplomats and western executives.

There is a police presence because of the proximity of at least one embassy and houses for diplomats. Many homes had western luxury cars parked outside, including BMWs, Land Rovers and Bentleys.

Three wireless security cameras peered out from the balcony above the brick porch. Under the terms of his bail, Ghosn had to have cameras installed at the house’s entrance.

No one came to the door when a Reuters reporter rang the doorbell. A double garage was shut and net curtains were drawn across the windows. Upper floor windows were covered by blinds.

A policeman on a bicycle made regular rounds through the small neighborhood.

Another neighbor, 62-year-old American Whitney Rich, said he had sometimes noticed a black car near the house.

Ghosn was initially arrested in Tokyo in November 2018 and faces four charges, which he denies. They include hiding income and enriching himself through payments to Middle East dealerships.

It seems unlikely he will now stand trial in Tokyo as Japan has no extradition treaty with Lebanon.

It was unclear how Ghosn, who holds French, Brazilian and Lebanese citizenship, was able to orchestrate his departure from Japan. He entered Lebanon legally on a French passport, one source has told Reuters.

In one audacious account from Lebanese TV news channel MTV, which Reuters has not been able to verify, a group of musicians arrived at Ghosn’s Tokyo house, performed and then packed up their instruments with him inside one of the larger cases. He was then whisked to the airport and out of the country with the help of privately hired security.

What is clear is that Ghosn was tightly monitored – a fact that has made his escape all the more spectacular. Authorities had monitored and restricted his movement and communications to prevent him, they said, from fleeing or tampering with evidence.

There always seemed to be a car at the end of the street near Ghosn’s house, said one Western expat who had lived in the area for nine months.

“He kept a low profile… There was a car parked constantly nearby,” the expat said, declining to be identified.

“He was under constant surveillance.”