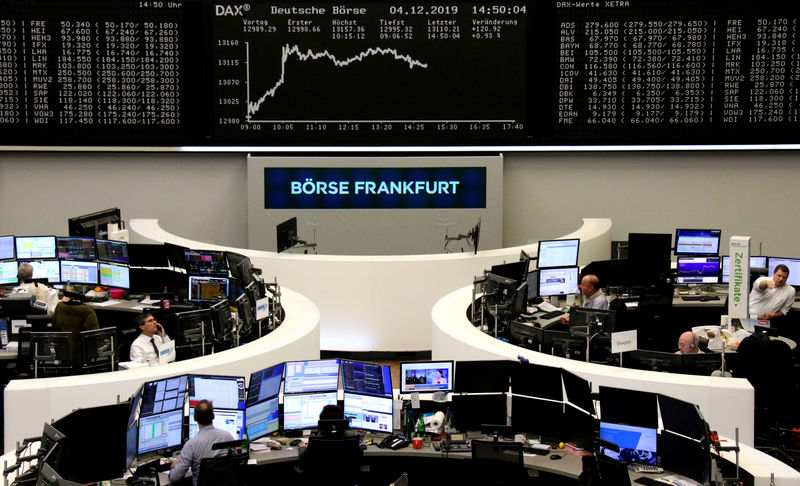 (Reuters) – European shares bounced back on Wednesday from a four-day slump as a report that Beijing and Washington were moving closer to a trade deal offset fears about a possible delay in resolving their prolonged dispute.

After opening marginally higher, the STOXX 600 () climbed 1% after Bloomberg reported that the two sides were closer to agreeing on the amount of tariffs that would be rolled back in a “phase one” trade deal.

The report lifted the benchmark from a one-month low hit on Tuesday after U.S. President Donald Trump said the trade deal might have to wait until after the presidential election in November 2020, with a U.S. bill protecting Muslim minority in China’s Xinjiang adding to the uncertainty.

“That Bloomberg comment seems to suggest that the two nations can have a political disagreement about what is going on in certain areas on one hand, but that won’t necessarily affect how they move forward in terms of the trade negotiations,” said Connor Campbell, a financial analyst at Spreadex in London.

“It suggests that a deal can be done by Dec. 15, which is really the key date here, before the imposition of new tariffs.”

Adding to the upbeat mood, IHS Markit’s final reading on November business activity in the euro zone came in slightly better than expected.

German shares () were up 1.1%, on course to post their biggest percentage gain in a month. Chipmakers such as Infineon Technologies (DE:) and STMicroelectronics (PA:) gained about 2% after upbeat earnings forecast from U.S. peer Microchip Technology (O:).

Dutch semiconductor company ASML Holding (AS:) rose 2.6% after J.P. Morgan raised its price target on expectations of strong performance in 2020.

French shares () gained 1.2% after Trump and President Emmanuel Macron said on Tuesday they hoped they could smooth out their differences over the digital services tax. Washington has threatened 100% tariffs on French champagne, handbags and other products due to the tax.

Shares in Swedish industrials group Trelleborg (ST:) added 5.5% after announcing restructuring plans that would move it to three business areas from five.

A big decliner was French telecom company Orange (PA:), sliding 4.3%, after traders pointed to disappointment over the firm’s dividend outlook even as it announced plans to carve out its mobile towers in most European countries where it is present. Europe’s telecoms index () was down 0.5%.