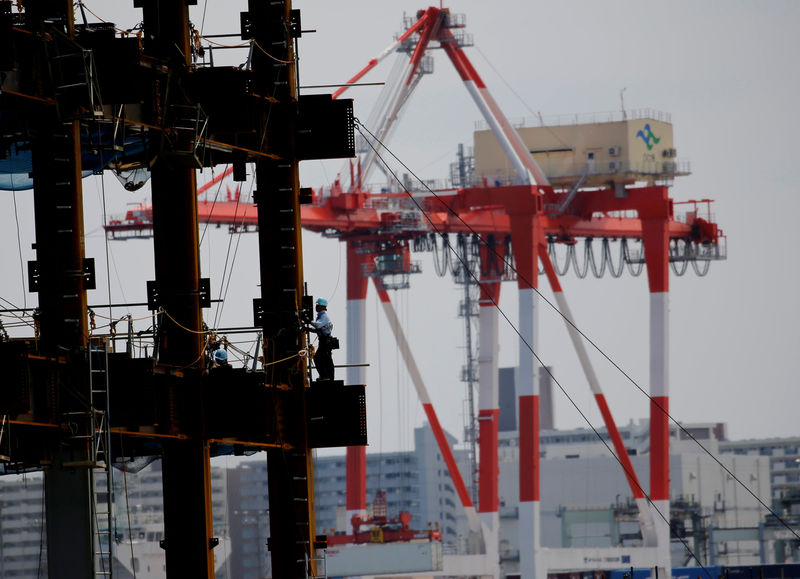 By Daniel Leussink and Izumi Nakagawa

TOKYO (Reuters) – As Japan’s construction firms are squeezed by the tightest labor market since the 1970s and a rapidly ageing population, they are pouring investment into technology – and providing unexpected support to an economy reeling from the bitter U.S.-China trade war.

The industry sees artificial intelligence and robots – which can that scurry around building sites day and night, preparing equipment and moving materials for the next day’s construction – as a way to future-proof and close the labor gap.

But a side effect is that one of Japan’s least-productive sectors is bolstering capital expenditure even as the world’s third-largest economy flirts with recession amid a global growth slowdown.

Construction company Shimizu Corp (T:), which spent about 3 billion yen ($27.7 million) for robots over three years, is a case in point.

Equipped with state-of-the-art AI, cameras and sensors, the machines handle everything from transporting building materials and welding steel to installing ceilings.

For now, Shimizu estimates the labor savings from the robots in its construction work to be 1.1%, far off the land ministry’s goal of a 20% productivity boost for the sector by the middle of next decade.

But the company hopes to eventually automate three-fourths of its work as it expands the range of tasks robots perform, said Masahiro Indo, general manager of its construction technology division.

“When it’s hot, workers need to take breaks and drink water. Robots don’t need that as they don’t get tired, so that’s good,” he said. “Once the robots become smarter, we are looking to increase the range of work.”

Construction work has blossomed in Japan under Prime Minister Shinzo Abe’s “Abenomics” stimulus and an infrastructure boom ahead of the 2020 Tokyo Olympic Games.

The government is also spending heavily on disaster relief as the country recovers from a slew of typhoons and flooding.

Capital expenditure in the sector rose 7.7% in the April-June quarter – far above the 1.9% gain for all industries – after a 15.3% jump in the previous quarter, government data showed.

That has moderated the pain of a 6.9% fall in manufacturers’ spending.

Construction firms plan to boost research and development spending by 15.5% in the fiscal year ending in March 2020, faster than the previous year’s 13.8% gain and 7.7% rise in the year before that.

It was the highest among all sectors, which overall plans to increase such spending by just 3.3%, the Bank of Japan’s quarterly “tankan” survey for September showed.

(Click here for an interactive graphic of the growth of the construction sectors’ R&D spending: https://fingfx.thomsonreuters.com/gfx/editorcharts/JAPAN-ECONOMY-ROBOTS/0H001QXGP982/index.html)

“While the short-term boost could be small, construction investment tends to offer long-term support to the economy.”

The pain of a small labor pool is made worse by an ageing population. Japanese aged 60 or older now make up about a fourth of the construction industry’s skilled workers, while those under 30 are just over a tenth of the total, down from about a fifth in the late 1990s.

That means all companies are fighting for workers as the jobless rate hovers at more than two-decade low of 2.2% and the number of job openings for every applicant is near its highest point in 45 years. (Click here for an interactive graphic of skilled construction sector workers grouped by age: https://tmsnrt.rs/36rHubs)

There were 5.1 million construction workers in Japan as of end-August, a 27% decline from 20 years ago.

Battling such headwinds while enhancing productivity are crucial, particularly for huge infrastructure projects such as overhauling the area around one of the busiest train stations in Tokyo.

The renovation of the Tokyo Metro Ginza Line’s station in shopping hub Shibuya, handled by Tokyu Construction Co (T:) and other firms is complex and includes moving an entire train platform.

In the past, that involved stopping train operations on weekends and intense training for workers on the project.

Now, a three-dimensional simulation of the process is shared among the workers, allowing them to identify potential problems with construction in advance.

The computer model reduced personnel expenses for that part of the project by about 60%, said Fumihiro Ojima, group leader of the ICT project group in the company’s civil engineering division.

“We could do things in the simulation model that are impossible in reality, such as removing a building and looking at it” from another angle, he said.

But such changes also bring challenges, such as requiring older workers to adjust to new technology.

“Workers will need to improve their skills,” said Kentaro Arita, senior economist at Mizuho Research Institute. “But that’s a high hurdle, and a full-fledged shift could be stalled if that can’t be done.”